Sketch of how I imagine the glass room to look 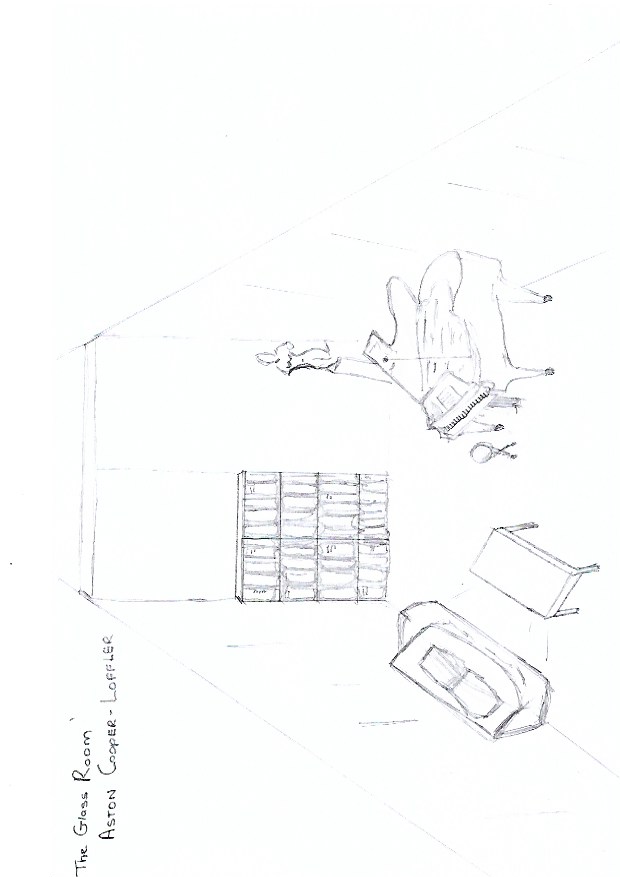 The Glass Room: Notes on Chapters 1-10

The Glass Room: By Simon Mawer

How do the architect and Viktor view history? Is it different to Liesel?

The architect Rainer Von Abt and Viktor view history in a negative was as they view it as a outdated, and that it should be abandoned in a sense. They want to live in the modern world completely. Liesel views history differently as her parents are very traditional, Liesel believes history is rich with culture and should be preserved (talks about this in Venice) and her dearest bother died in the war so she has lived her life in the traditional, ‘outdated’ world Viktor talks about. I think the pain caused by her brothers death and being married to Viktor has driven her desire to live in a modernist world and an advance in times, avoiding war and living a better life.

Who is Adolf Loos and what was he famous for?

Adolf Loos is a modernist architect, who plays a part of influence on modern architecture. He is famous for his essay ‘Ornament and Crime architecture’.

What is a machine living for?

A machine living for is a description of a simplistic home with only basic things required to live within this space, little decoration and no extravagant furniture. The structure includes many horizontals and verticals; presenting the futuristic, mechanical structure.

Write down some words that are often repeated and think about why they are important.

Jewish - Viktors religion is relevant to the context as the book is set during WW2 meaning his safety is at risk, along with thousands of other Jews.

Glass - A material which looks elegant on glance but is actually a fragile material. This mirrors Viktor and Liesel’s relationship which seems strong and perfect on the outside but is actually full of deceit in reality.

The architect is stating he will design them a house which almost makes their life.. suggesting it will be full of happiness. This is ironic as the further the houses development progresses the deterioration of the couple relationship progresses.

What does Viktor and Kata’s relationship represent? Is it different to what the rational building represents?

Viktor and Kata’s relationship represents disloyalty and betrayal. It also represents Viktor’s hypocritical nature, as he looks down on Hana for sleeping with a married man, when he is himself married and sleeping with a woman who is not his wife. It presents the inequality women and men have as he views Hana as a bad person and influence, but views himself as not doing anything wrong and continues the affair.

Is Liesel allowed to contribute ideas about what the house should look like?

Only occasionally. Most ideas, especially the structure are discussed between the men with barely any care of Liesel’s thoughts. From early stages of the book (page 20, line 7) the house is described as “Viktor’s vision” presenting Liesel’s minimal role in the design. However they do agree to have the furnishings all approved by Liesel.

Why is the Klimt portrait important?

It convey’s the wealth of the family. It also highlights Liesel’s parents taste in history which is contrasted by Van Abts disgust of history, decoration and ornaments and he describes it as “very decorative’ Van Art said…But Liesel knew the code: ‘decorative’ was not good.”

Chapters 8 and 9 are named ‘Interior’ and ‘Exterior’ after architectural terminology. However, neither of the chapters contain the building, what is the writer trying to do here?

Why architect against the Russians so strongly?

The building ignores the history as it is so interested in the modern technology.

How is the construction process similar and different to Liesel’s pregnancy? If the pregnancy has curved and organic lines and processes, how is this different to the building?

Both the construction of the house and Liesel’s pregnancy run in parallel, developing both at the same time. “But still things grew - the child in Liesel’s womb, the house in Rainer Von Abt’s mind” (Page 44 lines 18-19). Both contrast as Liesel’s stomach curves naturally whereas the house is stuck to rigid lines “verticals and horizontals.”

What does the Onyx symbolise?

The Onyx is a stone which is meant to absorb bad energy and protect the house, this is ironic as their relationship is so weak and fragile, presenting that this precious stone clearly isn’t working. “The fingernail of the goddess of love” (Page 54 lines 32-33) Ironic as they are falling out of love.

Look at page 31. What is the link between the camera and the glass surfaces the house will eventually have when complete?

They both present an image, themes of observation between the two. Both surfaces with no depth, both present an image. Could live in fear.. a presence. Might not be observed all the time but there is a potential of it. There is no real privacy… almost like you are there for show..

Is Kata the same as the architect? Are they both seducing a client for money?

Viktor in a sense does see Liesel's purpose for making life as he states they are going have three children without even discussing it with Liesel. He sees' Kata as an abject for sex, so in a sense he could see her as a machine for that purpose only. As he doesn't need her for anything else, he already has his 'perfect life exterior'.

The short story was published in 1892 and was written in the for of a dairy by a new mother and her decent into madness. The mother, her husband and their child live in a rural house for three months whilst the mother is overcoming her "Nervous Depression". John her husband and a doctor is supposedly treating her condition and claims he knows exactly what is best for her, which is complete rest. However, as the reader we soon discover that the isolation the mother feels almost feeds her depression as she is controlled by her husband.

Feminism is a key theme in this book. The narrator, the mother is completely controlled by her husband John who doesn't even approve of her writing a diary and this represents many women at the time the book is set. "I wanted to go down stairs.. but John would not here of it."

The narrator's room is at the top of the house has "windows barred for little children" suggesting it is prison like and mirrors the isolation she feels.

The narrator has a detachment from her child "such a dear baby! And yet I cannot be with him, it makes me nervous" This is a clear sign of postpartum depression which at the time they did not understand therefore explained her behaviour as a nervousness.

The more obsessed the narrator becomes with the wallpaper the more she loses her sense of reality until she feels the wallpaper was a part of her. "No person touches this paper bit me,-not alive!" She then continues to free the woman behind the wallpaper by peeling it and letting the woman "creep out" where in turn, she descends into complete madness.

The key themes and messages within the short story are oppression of women in the 1800s as well as the lack of understanding of mental illness at the time.

The Glass Room by Simon Mawer

How does cubism relate to the modernist house? (p.75)

Cubism related to the modern house due to its plain geometry. “Filla the cutest who finds echoes of van Doesburg in the plain geometry of the house”

As an idea or concept is the design of the house applicable to all architecture, or is it just a luxury?

It was a luxury to be able to live in a house like that due to the expense of the house. The modernist architect way of thinking was of a universal idea, a house for everyone but realistically it was only a luxury for the rich as the materials were expensive, the cost to build and the architect. Realistically it is only available for a small number of people.

Does the house represent that people at that time were more interested in abstract ideas rather than reality? What are they ignoring about the real world?

I think many people use the concept of abstract ideas to distract themselves from reality and the problems it holds at the time. Such as war, illness, gender equality, poverty. The glass room is a representation of this distraction and how everything appears fine on the surface but in reality isn’t.

How is Hana different to the other characters? Is she more transparent? Does she ignore the world? Is she most like the Glass Room? How does she different from Liesel? (see pages 85 and 98)

She is more open to modern outlooks and as a woman, she has the confidence to state how she feels. She is a feminist and is not ashamed to voice her opinion. Hana seems to display more of the characteristics of the home.

After the birth of Martin, in what way is Liesal’s behaviour different and similar to the house? Is she more or less rational? Is she adrift rather like how the house is adrift in relation to the past and its context? (see pages 85-87)

Does the house enforce unequal division of labour in the home? Would the house require more cleaning and tidying to keep it pristine and minimal? Who would do that work? (p. 92)

The division of the house is not equal. The maids do most of the work and Liesel tends the gardening. The jobs are not even and the females do the house hold chores. The house requires a lot of work to keep its minimal and almost un lived in aesthetic.

The architect says the house has no politics, is this possible? Is the house facist? (see pages 95 and 100)

“Architecture should have no politics, Rainer von Abt said.” P100 But I disagree with this. They like to think there is no politics but there is, gender politics especially.

Earlier in the book Kata and Viktor share private and intimate moments together, but never share their own private homes and spaces. When Kata invites Viktor to her flat, how is it different from the Glass Room? It might appear less transparent but maybe it is more so. (p.104)

It brings them closer together, she is showing him her private life, which is transparent. I think it is more transparent than the glass house as she presenting the truth about where she lives and who she is, a mother. Where Viktor’s glass house holds lies, such as him having an affair with Kata.

When Viktor is in Kata’s flat why does he look at the door? As a threshold what does the door represent? In her flat is domestic life hidden like in his house?  (p.105)

Their relationship changes when Kata lets him into her home. Kata’s home is a honest view of her life, not perfect. But Viktor has his ‘beautiful’ glass house which appears flawless. Kata lets him see it all, and in a way lets herself be vulnerable.. him seeing her daughter. In a way it does bring them closer together. Viktor and Kata going through the door of her home could represent a barrier being crossed as they become closer.

Is it really possible for people to be like the glass room? Can they be completely transparent?

Public figures should be open to the world and be transparent. - We hope for this in politics but often they present a fake transparent exterior. Depends on the context of where they are. Inside of the house is very secretive even though it has an open interior. Light can effect the transparity of the house. So like the characters, it might not be as transparent as it seems.